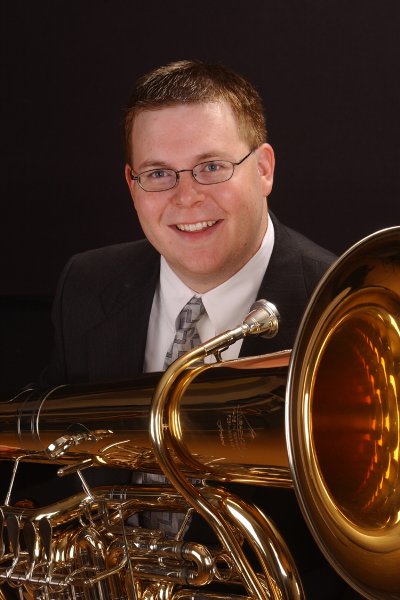 Dr. Steven Maxwell is Assistant Professor of Tuba and Euphonium at Kansas State University and is an active clinician, adjudicator, and soloist throughout the United States and Europe.

He has been a guest artist at numerous conferences including the 2013 United States Army Band Conference, the 2012 International Tuba and Euphonium Conference to be held in Linz, Austria, and the 2009, 2005, and 2003 Great Plains Tuba Euphonium Conferences. Under Dr. Maxwell's direction the K-State Tuba Euphonium Ensemble has performed at the 2011 United States Army Band Tuba-Euphonium Conference as well as numerous regional conferences. Dr. Maxwell received his Bachelor of Music in Education from Iowa State University, Master of Music in Performance from Kansas State University, and his Doctor of Musical Arts in Tuba Performance at the University of Missouri-Kansas City Conservatory of Music. He has studied with Toby Hanks, Paul Hunt, Michael Short, Thomas Stein, and David Stuart. Dr. Maxwell has held the position of principal tubist of the Chautauqua Festival Orchestra in New York and the principal tubist of the Central Iowa Symphony. He is also an associate editor of the International Tuba and Euphonium Association Journal. At Kansas State University Dr. Maxwell teaches brass techniques and History of Rock and Roll. Maxwell is also the tubist with the K-State Faculty Brass Quintet and the director of the K-State Tuba-Euphonium Ensemble.